Act 2 of the European Debt Crisis spectacle has begun and you’re all invited to watch. At center stage is now Italy, crumbling under its accumulated debt and the new government’s poor ideas. How this story ends remains unclear, and while it does look dramatic, calling for a tragic Shakespeare-esque finale, we would hope that 2018 policy writers will manage to pull off a happy(ish) ending for this Italian tale.

The fact that investors got scared off by the ideas of Italy’s newly-installed government— the right-populist Northern League and the left-populist Five Star—сomes as no surprise. The officials started off by suggesting the ECB should forgive 250 billion euros of Italian debt, which did not go unnoticed by the markets. The idea did get dropped just days later, but that didn’t add much optimism. On top of that, the idea has been floated to issue retail bonds ranging from €1 to €500, a de-facto parallel currency. We don’t see them going through with that either. And yet it’s absolutely clear that the populists are bound to make a fatal mistake sooner or later. 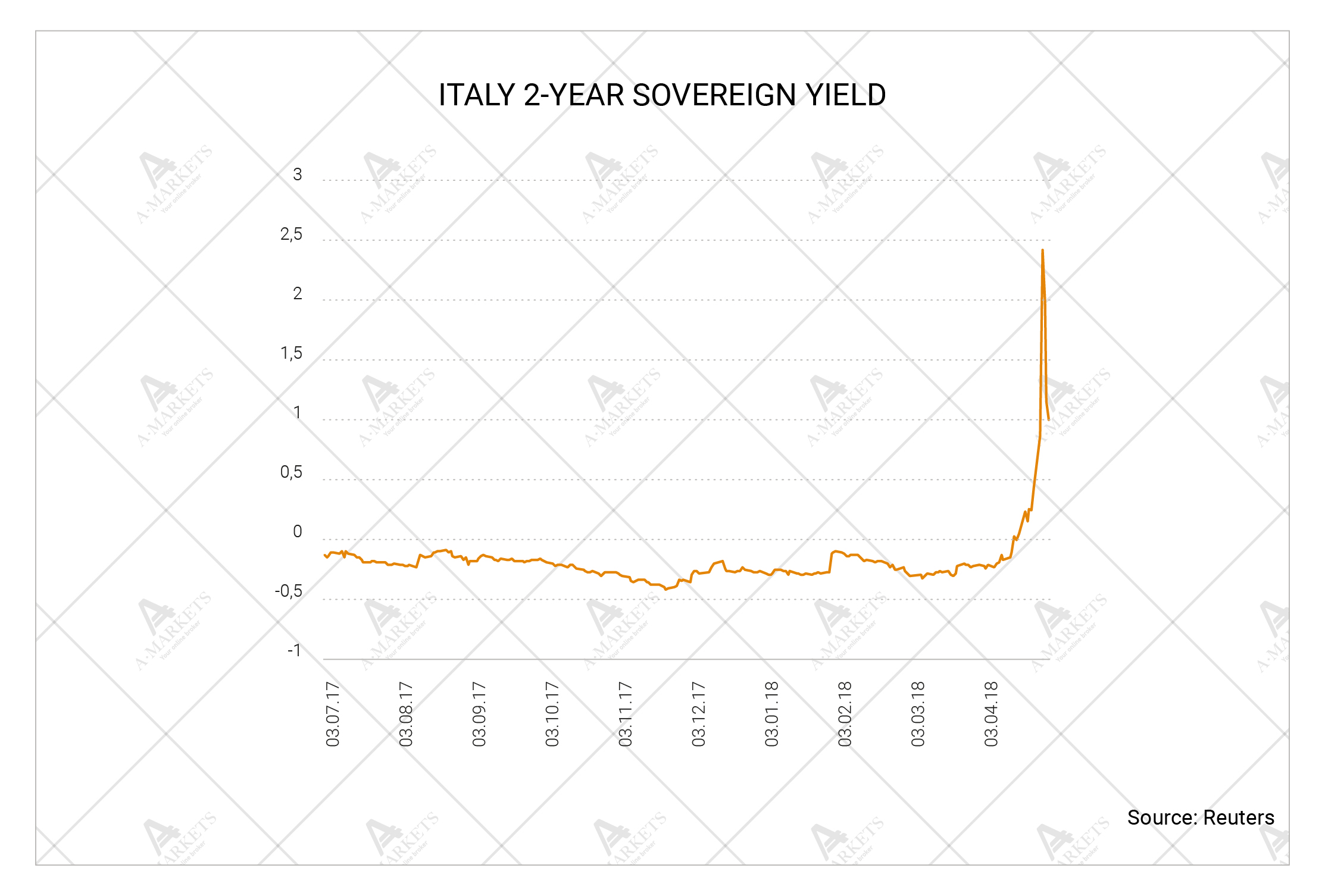 The last decade of May saw Italian markets selling off hard. The country’s 2-year yield soared by 2pp, the 10-year followed suit. It is important, however, to point out two things. First, reportedly the ECB has been absent from the market, holding back the fire of its QE program. Secondly, on May 30 the Italian government managed to sell a fresh issue of bonds, albeit at the highest yield since 2014. That means that the market is still breathing and we’re not in for another 2011 Greek tragedy, at least for now.

This Italian drama is likely to continue for the next few months. The market will remain tense through the summer, and at least for as long as there is no clarity on the new government’s fiscal plans. To sum up, what we’re looking at here is a scenario similar to the political shakeup on the Greek and Portuguese markets in 2014 and 2015 respectively. In both cases, the then-newly elected officials were seen as market-unfriendly raising concerns about the fiscal policies being implemented. And in both cases the governments were ultimately compelled to resort to fiscal consolidation. 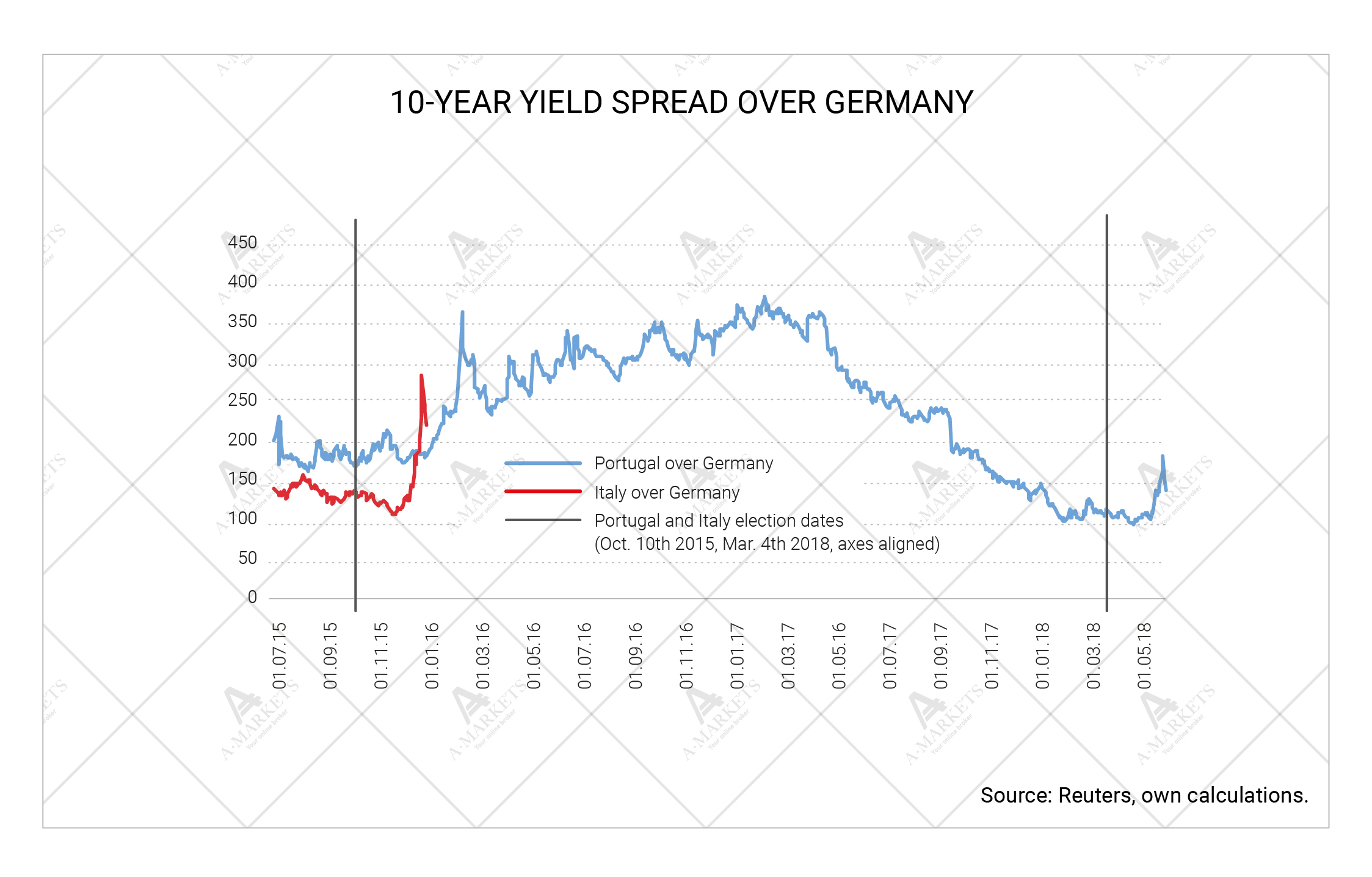 This one is a little different, however. The uncertainty and risks are significantly higher—and so is Italy’s sovereign debt. It currently stands at a massive €2.3 trillion, which is ten times bigger than the entire economy of Greece or Portugal. Moreover, recent polls show that support for Northern League and Five Star is growing.

So what’s next for Italy? We believe that the first wave of the sell-off is nearly over. We expect the 10-year yields will consolidate around 3%, keeping officials on the edge of their chairs. Then we wait for the government plans to be revealed. After they are announced, there could be either another collapse in euro-assets, or a quick currency rebound, similarly to what happened in France, when the liberal-minded Emmanuel Macron defeated Marine Le Pen. 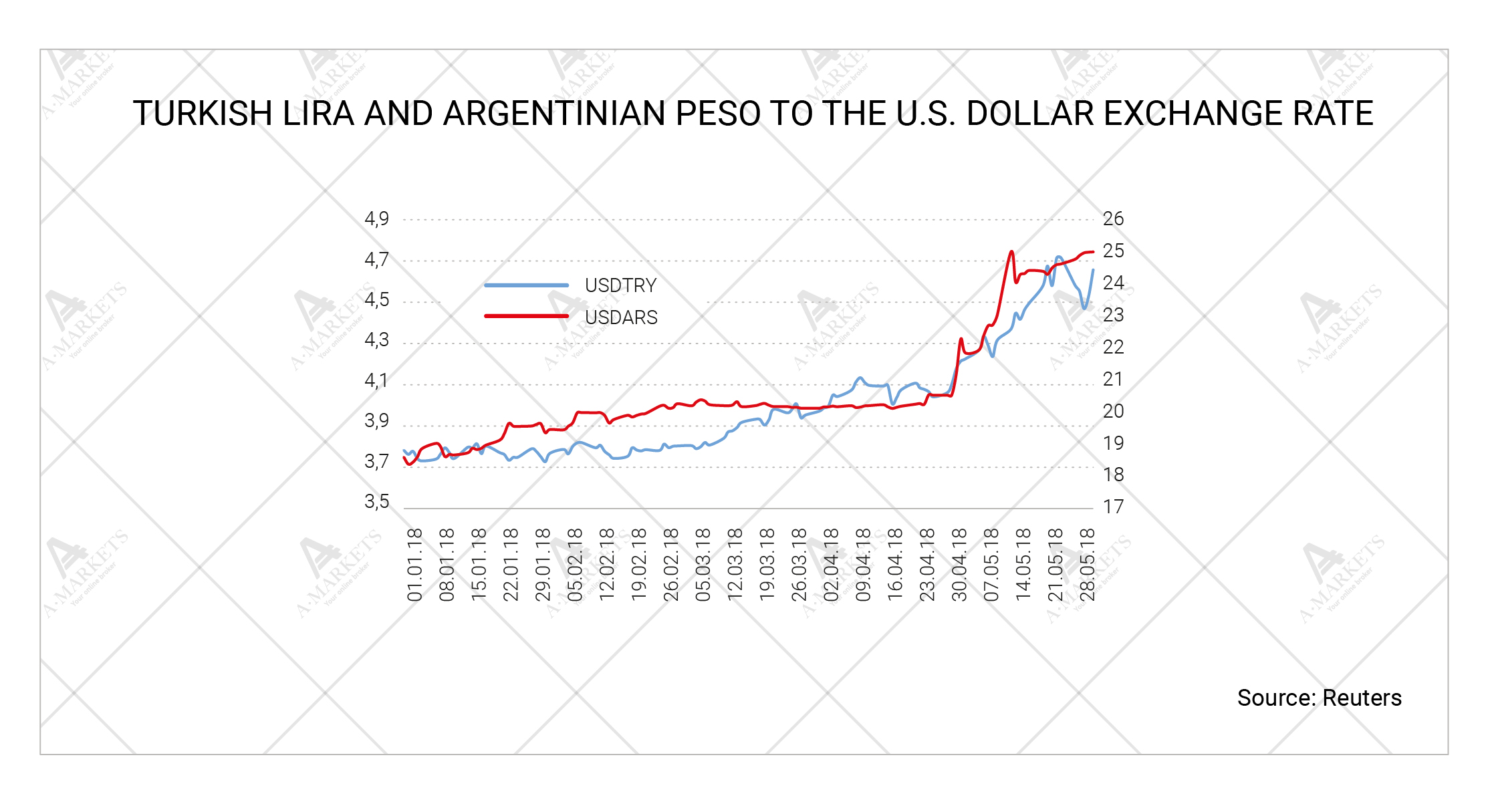 Another major story is Turkey. The country’s bond market and national currency are free-falling ahead of the presidential vote, set for June 24. Turkey’s current leader Erdogan is seeking re-election, and he’s likely to win. As in the case of Italy, investors are spooked by the politician’s economic ideas. Specifically, the Turkish leader plans to take over the country’s central bank, curtailing its independence. Mr. Erdogan has already described interest rates as “the mother and father of all evil.”

And so the dollar is nearing the psychological barrier of 5 liras. The government, of course, blames it on the speculators, and yet it’s hard to believe many would want to keep their money in a country with a deteriorating investment climate. Turkish macroeconomic situation doesn’t look promising either. The growth rate seems to be solid for now, but it’s absolutely clear that it’s in for a sharp decline soon. Whereas inflation is surely to remain firmly above 10% for a while, should the president continue to push for his destructive ideas.

For now the Turkish story remains local, so do the problems in Argentina that surfaced a couple of months ago. However, if Italy goes all-out populist, and Turkey proceeds with its reforms against market forces, the whole EM-world could find itself under pressure. EM-currencies are likely to struggle over the next month as well. The situation is likely to get clearer in July/August, and we do not rule out another steep sell-off across emerging countries, Russia being no exception. 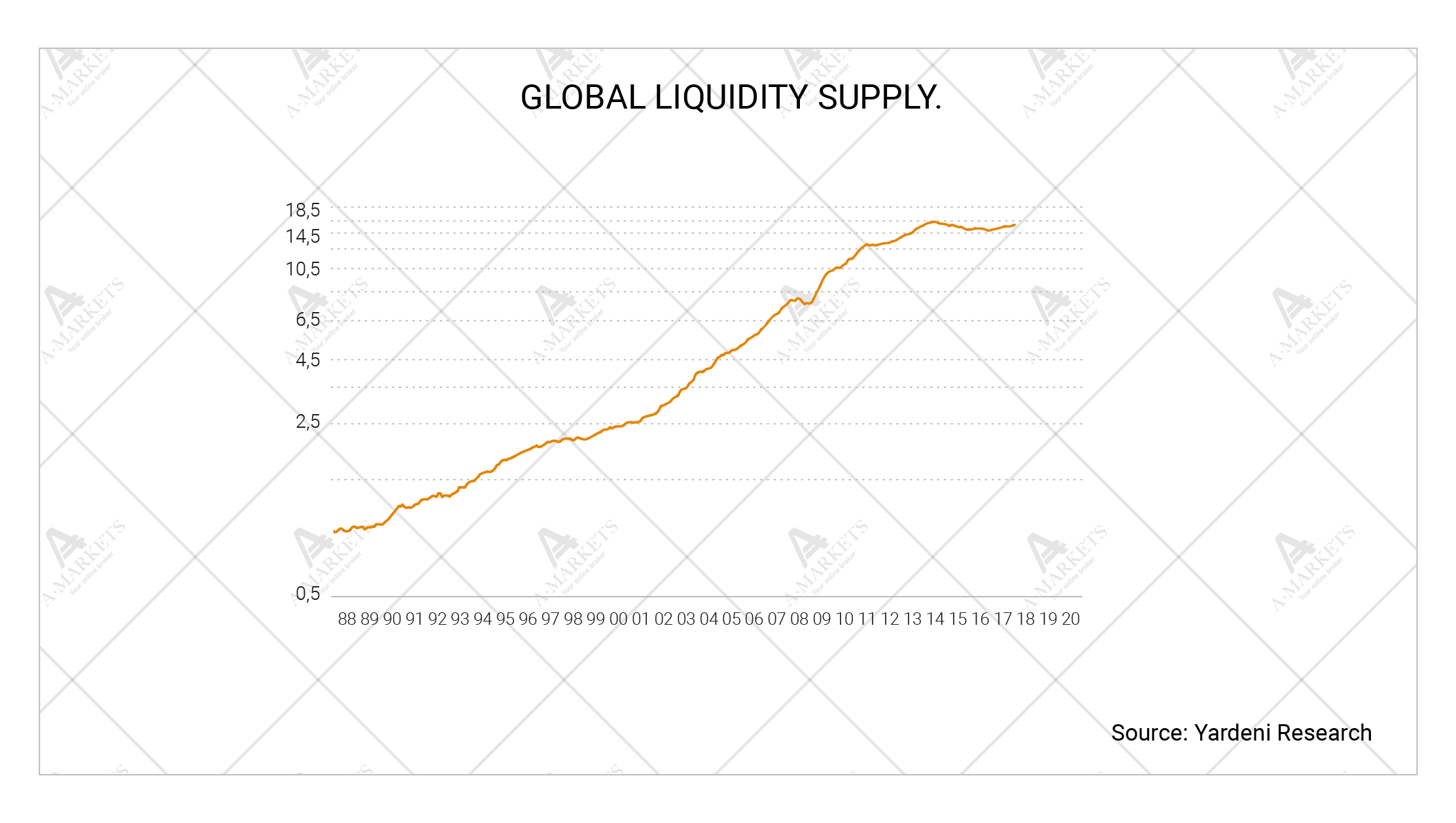 The highly important moment here is that the issues in Italy, Turkey, etc. manifested themselves just when global liquidity stopped growing. We believe that just a year ago an identical situation, say, with the Italian government would go largely unnoticed by the market. And yet there’s no fresh money flowing into the market anymore, which makes volatility go up. This is most noticeable in those segments that already look like bubbles, primarily those very same eurobonds and EM-assets. 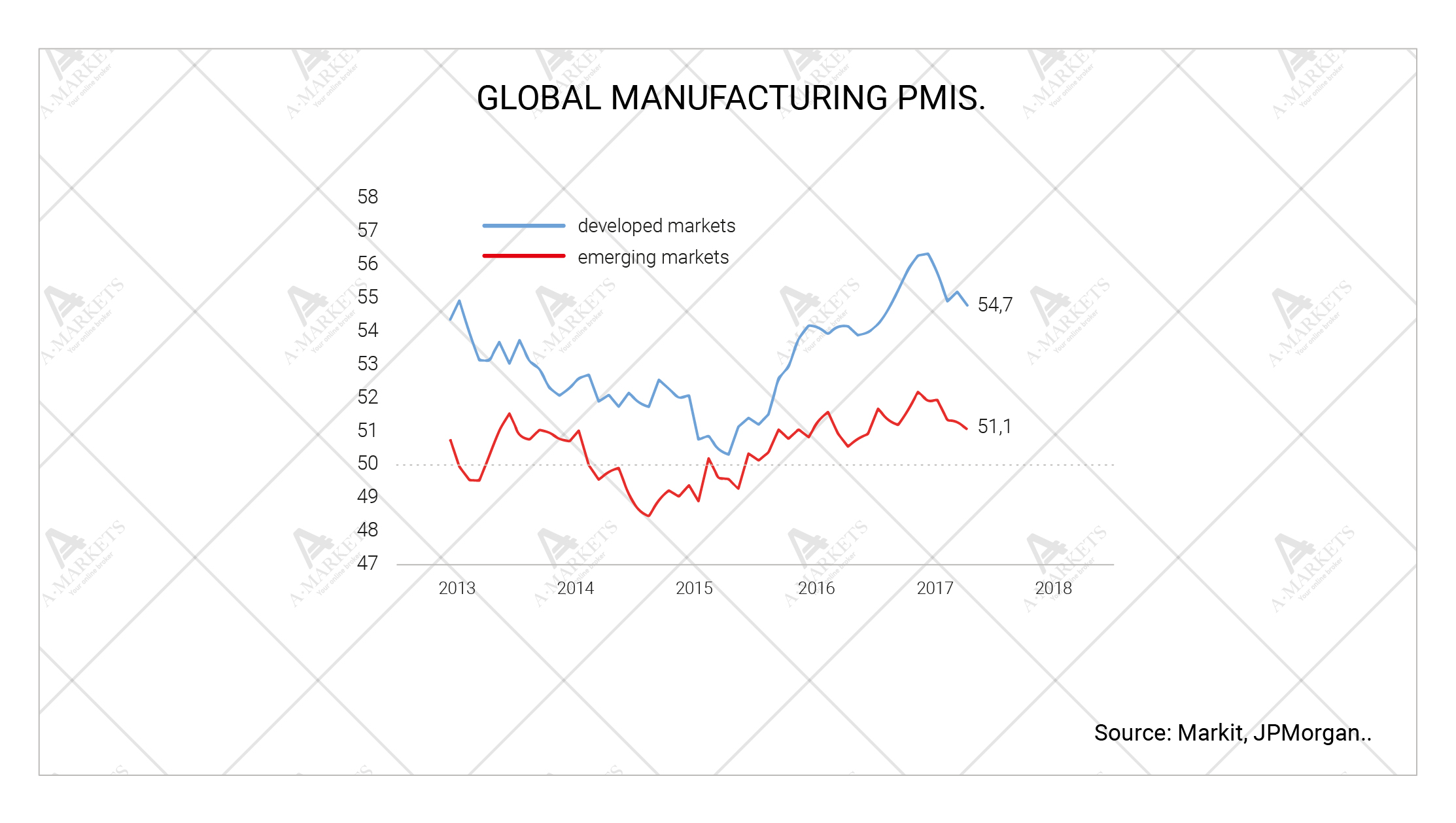 The situation elsewhere is more or less stable and predictable. Global economy is slowing down which is evident from any data. Most regions are registering sluggish growth in comparison to the peaks of late 2017. Yet this still looks like regular macroeconomic volatility, and there are still no signs of a looming recession. The growth rates are simply stabilizing, albeit in the face of an unfavorable political background.

We expect to see some risk aversion across all markets. Neither stocks nor commodities are likely to manage to rally under current circumstances. Volatility is staying high as there is no more liquidity coming in to suppress fluctuation. Should the VIX dip into the 12-13 area, this would be an anomaly from the macroeconomic viewpoint. We would actually use that as a good entry to buy volatility. 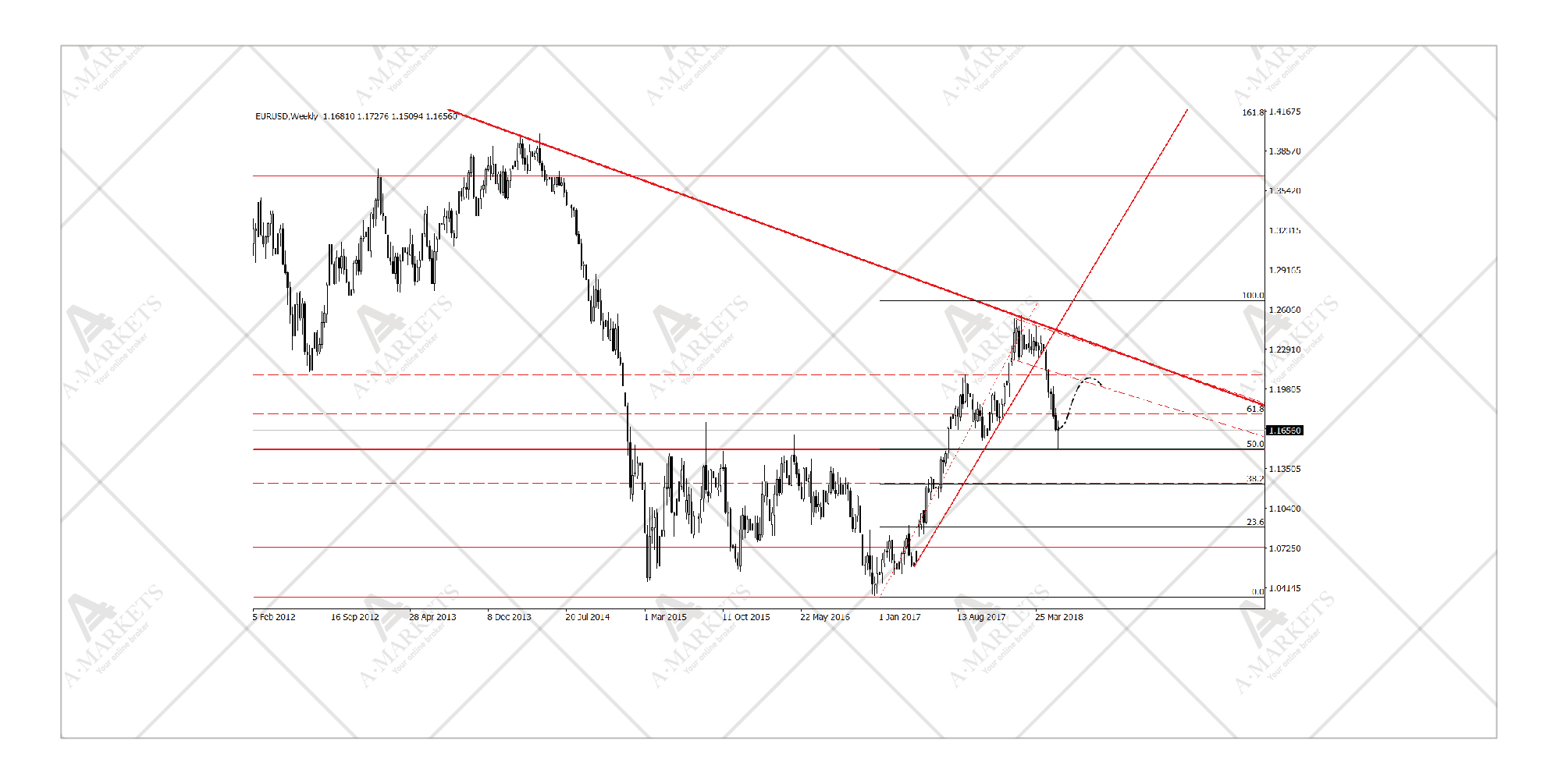 The euro leg down took a long while to happen, but did it not disappoint. Our first target was the 1.172-1.179 area, but the Italian mess swiftly pushed the prices much lower. EURUSD fell to about 1.156 on a very strong momentum. And yet we still view this as a normal correction versus the recent month’s growth.

The new Italian government is still an issue to deal with. But it’s not a reason to expect the European currency to depreciate further until there’s more clarity. We still prefer to go with a tactical long against 1.156, setting the stop-loss just below the levels we outlined at the end of April (1.144 instead of 1.148). The key changes in the big technical picture for the pair are now in its targets for the move up. At this point the rebound rally is likely to top out just below the 1.2 mark.

Note that all of the above are our tactical views. Strategically, we still expect the pair to clear the 1.3 level. Except now it’s unlikely for that to happen before second half of 2019.

AUDJPY: a perfect substitute for USDJPY. 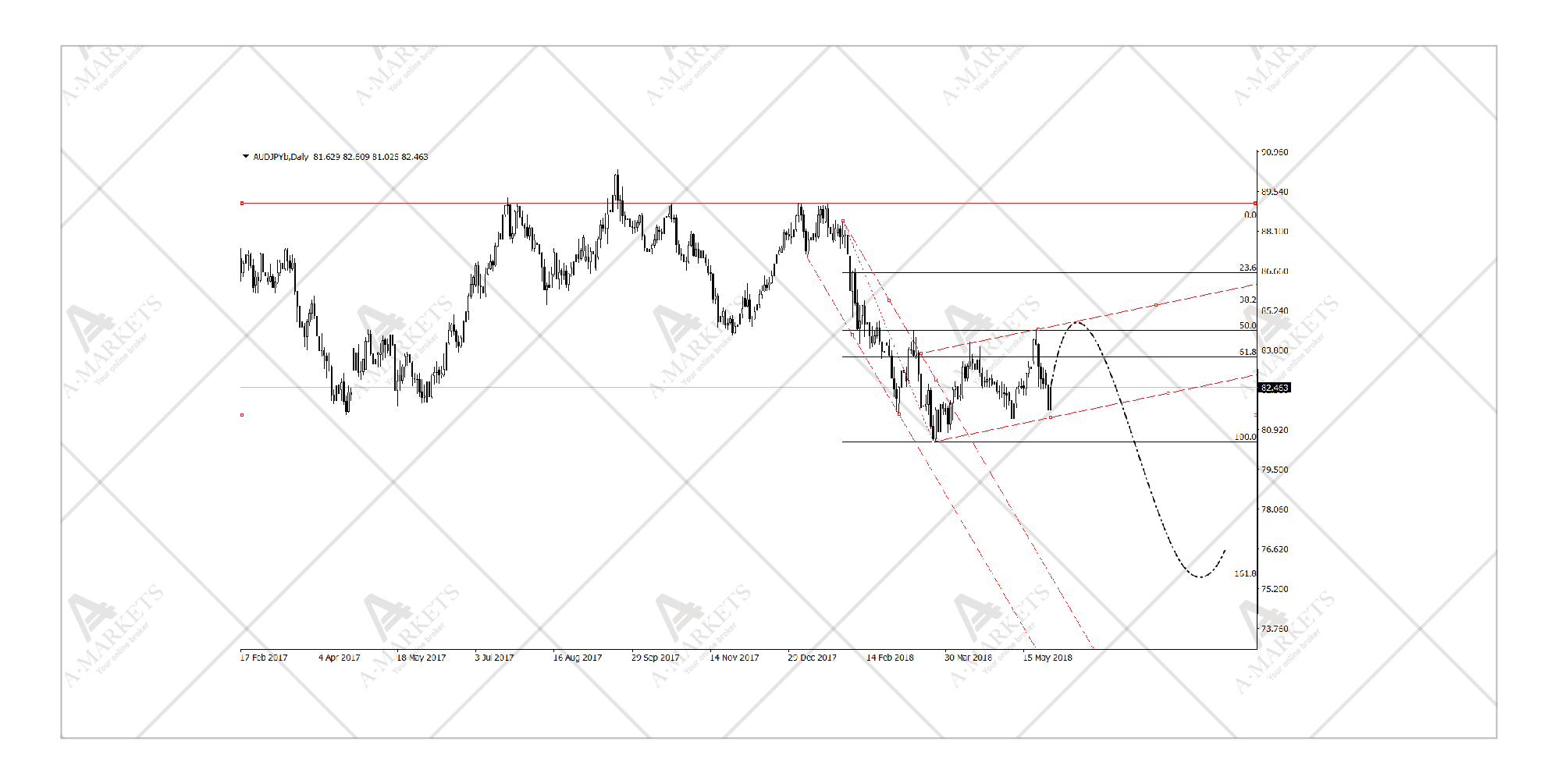 One of our main trade ideas last month was a short in USDJPY at 111.7. The pair reached a high of 111.4 in May, meaning that strictly speaking the signal missed the entry point. And then the take-profit order was at 108.00, and the low for the month was 108.14. Basically, the move has happened, but falling short by a few points on both sides of our estimate.

The USDJPY idea can be dropped now, but if you still want to play the long yen, the best candidate for this is the AUDJPY. The Australian dollar is traditionally extremely sensitive to the global economic cycle, meaning that there’s a high chance it ends up an FX loser over the next month or two. On the contrary, the yen is a major beneficiary of risk aversion and has all the potential to strengthen even further.

From the technical viewpoint, AUDJPY is in a prolonged corrective move after tanking from the 89 mark, where it was trading just this January. We’ll be looking to open a short position in the pair just above 84.

The rouble is holding its ground quite well amid the general market shakeup. Following a rather painful response to the new round of sanctions, the Russian currency has stabilized in range of 61-63 per dollar. Unfortunately, the current circumstances are not going to allow the rouble to strengthen any further. Instead, we see a potential risk of another wave of sell-offs across the entire EM spectrum.

Should the sell-offs happen, it will be mostly technical. The key short-term risk here is the rebalancing of the funds holding Turkish and Argentinian assets — they are likely to reduce positions in the emerging markets generally. Moreover, the rouble is also being affected by the Italian shakeup as a lot of speculative European money is in Russia. To top it all off, a lot of investors view Russia to be just as much of a credit risk as Italy.

As in several other assets, we expect the prolonged corrective move to continue here. There’s a high chance of another sell-off that could push the rates into the 65-67 area. That’s where we would flip into a long position in the rouble. Fundamentally, the macroeconomic story looks phenomenally good. 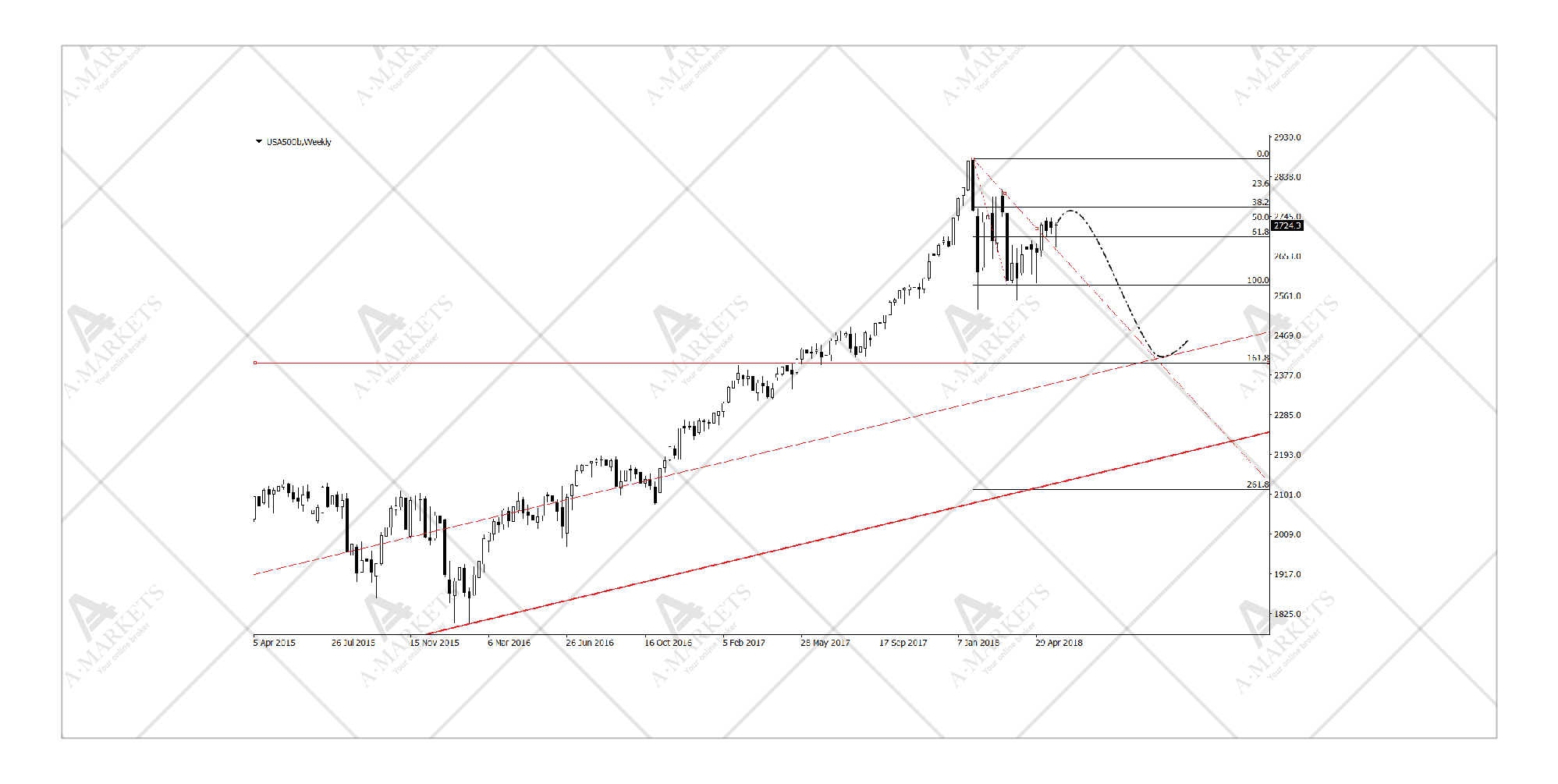 The American market index just won’t decline. But that’s when you remember the EURUSD story. The common currency took ages to enter a corrective move but ended up going down to where it was supposed to. The technical picture here is begging for a correction as well. It’s too early for the index to rebound, especially considering the current fundamental situation.

The Italian drama is a pain in the asset for all global banks, so at least that risk could take stocks lower. Ironically, it will be banks, specifically the U.S. ones, that will be the most attractive sector to buy once they have moved lower. It’s banks that benefit the most from policy tightening and we have no doubt that the Fed is already readying it’s next rate hike.

Continuing the euro-dollar analogy, we note that the potential decline of the American index is a tactically good idea for speculators. Deep pullbacks would be a better use for strategic money. The move down we’re anticipating is likely to be corrective, and we see no reasons for a prolonged bearish market.